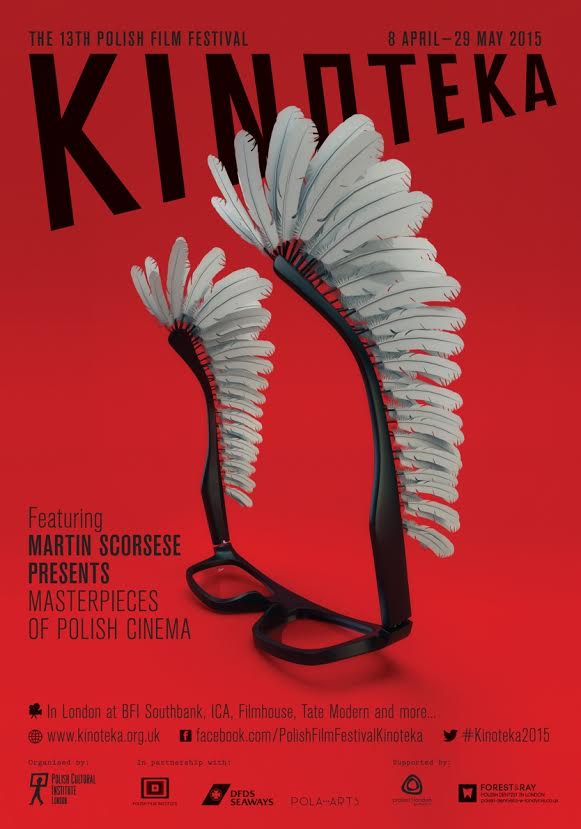 KINOTEKA returns to the capital for an extended bumper 13th edition. On offer there is an enticing mix of film, music and visual arts: an outstanding selection of screenings, exhibitions, concerts, workshops and special guests. The program will kick start on the 8th of April at the BFI Southbank with the Martin Scorcese Presents: Masterpieces of Polish Cinema - a selection of the best Polish classic films digitally remastered to 2K resolution.

On the 10th April the program follows with the New Polish Cinema strand at the ICA with a selection of the most popular and critically acclaimed Polish films from the last year. KINOTEKA also showcases original and innovative documentaries including early documentaries of the Oscar-awarded Paweł Pawlikowski, one of the most prominent Polish documentary filmmaker Wojciech Wiszniewski and Oscar nominated emerging talents Aneta Kopacz and Tomasz Śliwinski.

This year at KINOTEKA cinema meets art: BFI Southbank will host an exhibition of poster artwork celebrating the films of legendary director Andrzej Wajda and Tate Modern will screen The Performer by Łukasz Ronduda, a dynamic story full of punk energy based on the life of Oskar Dawicki, one of the most original contemporary Polish artists currently working. ICA will also host a sensual screening of 15 Corners of the World celebrating the work of Eugeniusz Rudnik, the father of Polish experimental music. KINOTEKA will end with a special screening of cult Polish comedy The Cruise (1970) at the ICA to mark Second Run’s DVD release. Taking inspiration from the film’s subject, festivities continue with an authentic boat ride on the Thames, featuring interactive performance of an immersive UK theatre group Gideon Reeling, with live jazz by Obara International and DJ set to close the evening.

What kind of braces do you need?